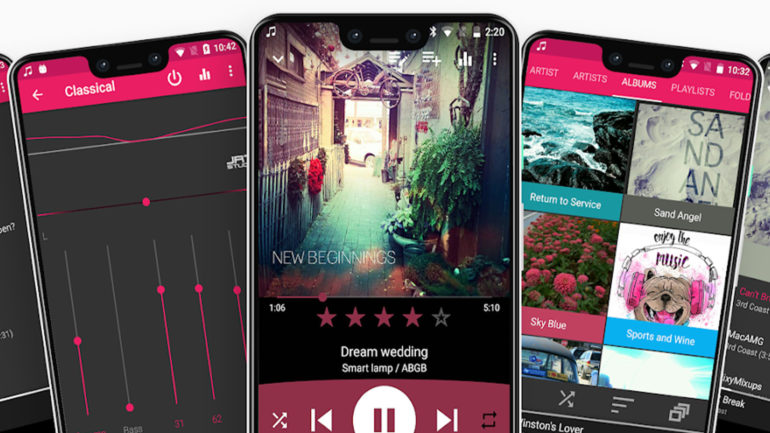 Choice can be different but everyone loves music. if you still haven’t gotten used to how these services to listen to music online work, you are not alone. Because of that, there are many great apps you can use to listen to your music collection without an internet connection. Here Is Our Best Offline Music Player Apps for Android.

One of the most popular Music Player App on our list, Poweramp is yet another exclusive for Android devices. It brings to its users the possibility of using a 10 band equalizer, as well as being able to adjust the highs and the lows of your songs directly on the app.

It has support for several file formats, including MP3, MP4, WAV, FLAC, and many others. Learn more about Poweramp by following the link to the Google Play Store.

If you aren’t satisfied with the lighter options discussed so far, we recommend giving Pixel Player a try. It’s not as well-known, but it’s still pretty great.

While Pixel only supports basic file formats, it has a five-band equalizer with bass boost, gapless playback, a built-in tag editor, and a few options for customization, such as themes and colors. Most notably, Pixel Player can analyze what you listen to and suggest more music that matches your tastes.

Pixel+ Music Player is also available. This removes ads and unlocks all features.

Deezer has got all the features you would need to consider it as one of the best offline music apps because it has an offline listening mode along with a huge library of tens of millions of songs.

It allows you to stream all the newly released songs, all the popular songs, the hits, and more, and you can even use the “Shuffle” mode to discover new tracks that you’ve never heard before. And if the songs aren’t the only thing you want in a music streaming app, then Deezer also gives you access to tons of popular podcasts as well as radio stations.

However, the main feature that we are interested in, the offline listening mode, is available as part of its premium subscribers only.

When you are connected to the Internet, you can download your favorite songs and podcasts, and then you will be able to listen to them even without WiFi or an internet connection.

And you get a lot of other premium features as well with the premium subscription like you won’t see any irritating ads, you will be able to skip tracks that you don’t like, you will get a superior sound quality among others.

The best part is that Deezer offers multiple subscription plans, like Deezer Family & Deezer Student, so you can get the best benefits at the best price.

4. Napster
Previously known as Rhapsody, Napster is the pioneer of the music streaming race. Napster boasts the presence of 40 million songs in its repository from thousands of music artists and DJs. Users love the friendly interfaces and critiques places the mobile apps Napster in the most intuitive User Interfaces ever built in the music streaming industry. Its song search feature is far better than Spotify or other offline music streaming apps.

Napster is a premium app that comes with two packages of paid subscriptions. Only the premier package allows you the without WiFi music listening. It comes with 14 days free trial also. Along with the ability to listen to music without wifi, you can access millions of songs on-demand.

Offline Music Player – Play all your favorite tunes offline!
Offline Music Player is a simple to use music player that allows you to play the music stored on your device in high quality and with ease. The application uses very few system resources and allows users to create playlists by adding songs to a specific folder. All in all, this is a good app for simple and effective music playback.

BlackPlayer is the best free music player we’ve ever used. It’s clean, modern, lovely on the eyes, easy to navigate, and packed with features. You get a five-band equalizer, gapless playback, scrobbling, and sleep timer.

A premium version, BlackPlayer EX, has extra themes, fonts, extra settings to tweak, more ways to customize your experience, a visualizer, better sorting, and the first taste of all future features. For just a few dollars, it’s well worth it.

7. Musify
This is a free legal offline music app that allows you to listen to unlimited songs and one of the best music apps that don’t need Wifi for offline mode. This is more like a music community where you can explore new music tracks and interact with other music lovers as well. Based on your listenings and like, you get recommendations for other similar music tracks as well. This app imports music tracks from SoundCloud and other music-sharing websites. You would love this for free music without WiFi.

The music library of this offline music app is not limited to the pre-recorded tracks. You can also stream to live concerts, remixes, DJ sets, and more as well. This app also supports background music players and iPod-like music playlists. This app allows you to download unlimited music. You can also listen to the music before downloading it. Downloading music for offline listening is also very easy as follows

8. Shazam
One of the oldest and most popular apps in the Apple ecosystem, Shazam is unlike all the other options in this list: it is not an app to play music, but one with which you can identify them. For instance, imagine you’re at a bar and a song you like starts playing, but you, unfortunately, can’t remember its name or even the artist’s name!

In scenarios like this one, you can easily open Shazam to then “listen” to what’s playing and tell you who’s singing and even the name of the track, From there, you can look for the song in any of the platforms to download it. Shazam is available both on Android and on iOS.

BlackPlayer is a simple, but elegant music player that puts very little between you and your music. It operates on a tab structure and you can customize the tabs to use only the ones that you actually want. On top of that, it has an equalizer, widgets, scrobbling, an ID3 tag editor, no ads, themes, and support for most commonly used music files. It’s delightfully simple and a fantastic option for fans of minimalism. The free version is a little bare-bones with the paid version providing far more features. Thankfully, the pro version isn’t expensive. As of our July 2019 update, the free version of BlackPlayer seems to be missing in action. We’ll check back in a few months to see if it comes back.

DoubleTwist Music Player had its ups and downs over the years. It’s currently on an upswing, though, and it’s a good overall music player. The free version has a strong offering, including almost all of the basics. You get playlists, support for the most popular audio codecs (including FLAC and ALAC), a simple UI, Chromecast support, and Android Auto support. There is an optional add-on for Apple AirPlay support ($5.99) and a premium version ($8.99) that adds AirPlay support along with a 10-band equalizer, a SuperSound feature, themes, and some other stuff. In addition, the free version lets you listen to radio stations in your area so there is a music streaming element as well. There are even some features for podcast listeners, such as the ability to skip silences in the premium version. It’s a tad pricey, but it’s good overall.